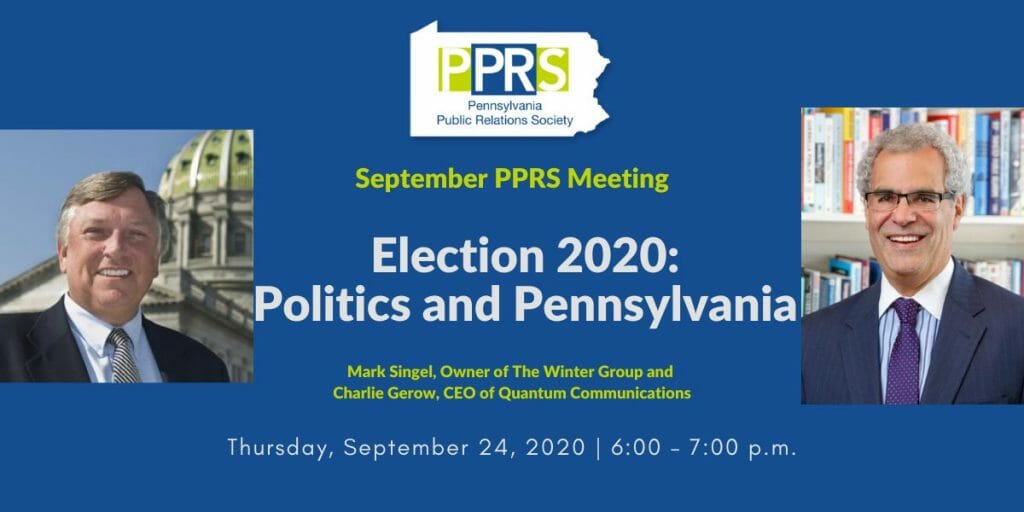 Presidential elections can serve as critical pivot points in state and national politics, and election 2020 is no exception. This election’s key issues tend to be national in scope: corona virus, police reform, historic unemployment, repairing the economy, and getting children back to school. But what do these mean to Pennsylvania specifically?

Join us at our September meeting as we hear from renowned political strategists Charlie Gerow, CEO of Quantum Communications, and consultant, lobbyist and former Lieutenant Governor  Mark Singel, as they discuss the issues facing the Commonwealth—and the nation—this fall.

A nationally recognized leader in strategic communications, Charlie Gerow is CEO of Quantum Communications, a public relations and issue advocacy firm. He also serves as the First Vice Chairman of the American Conservative Union, and as an elected Member of the Republican State Committee of Pennsylvania,

In addition to national media appearances, Charlie serves as a political analyst for the Harrisburg CBS affiliate (CBS-21), writes a weekly column for The Harrisburg Patriot-News (PennLive), and provides regular political commentary in The Hill, on the Pennsylvania Cable Network (PCN) and many other outlets and programs.

A graduate of the Villanova University School of Law, Charlie began his career on the campaign staff of Ronald Reagan. He’s been involved in every presidential campaign since, serving as both a senior advisor and surrogate speaker. Elected as a Delegate to several Republican National Conventions, this year Charlie was selected to be an at-large delegate. Follow Charlie on Facebook at @CharlieGerowPA and on Twitter at @Charlie_Gerow.

Mark Singel has been a contract lobbyist and consultant since 1995. From 1987 through 1995, he served as Lieutenant Governor of Pennsylvania and, for a period of time, Acting Governor—the only person in Commonwealth history to serve in that capacity. Prior to his terms as Lieutenant Governor, Mark served six years in the State Senate and was chief of staff to two members of U.S. Congress. He also served as Chairman of the Pennsylvania Democratic Party and President of Pennsylvania’s Electoral College. Upon leaving public service, he became a consultant, playing key roles in the legislative and administrative processes of government from a different perspective. Mark served as chairman of Governor Ed Rendell’s Transition Executive Committee and maintains strong personal and political ties with leaders at all levels today. Mark maintains relationships with key members of the House and Senate on both sides of the aisle and is a known Harrisburg “insider” with a reputation for getting results. He is consistently listed as a key operative at the state level and is a regular commentator on local and statewide political broadcast programs. He is a sought-after speaker at both political and academic events and is active in numerous community and philanthropic activities.

< Back To Events
Ready To Join PPRS?Apply Now!